So I harvested, dried , & cured the product but I forgot to update it into the grow. At the end of the grow I had enough for 1 nice joint. I did this grow not to yield high numbers , but out of curiosity. I used bag seed that was 2 years old sitting in my grinder , I grew the seeds out, used a $30 diy set up with only 2 cfls, miracle and only fed with water. I also pre flowered the plant and started flowering after 3 weeks from being sprouted. I must say I was very impressed with the quality. It was the smoothest smoke I ever had and I believe it’s due to the fact I used nothing but water to feed, it almost felt like smoking out of a non nicotine vape pen. Super smooth, the plant was a hybrid with a heavy couchlock feeling at first which then turned into head high ( not a fan of head highs I prefer indicas ) but over all I was very satisfied with the product. Had a berry smell , taste was almost like a coconut. I was hoping to have gotten another seed from it but wasn’t fortunate enough to get another. I have no idea what the strains could’ve been as they were from 2 years ago but overall happy with what I grew. That is the end of this grow , and feel free to follow as I will start another grow mid August! Thanks guys

tristanstree Do you know about how long till my plants will start to smell? 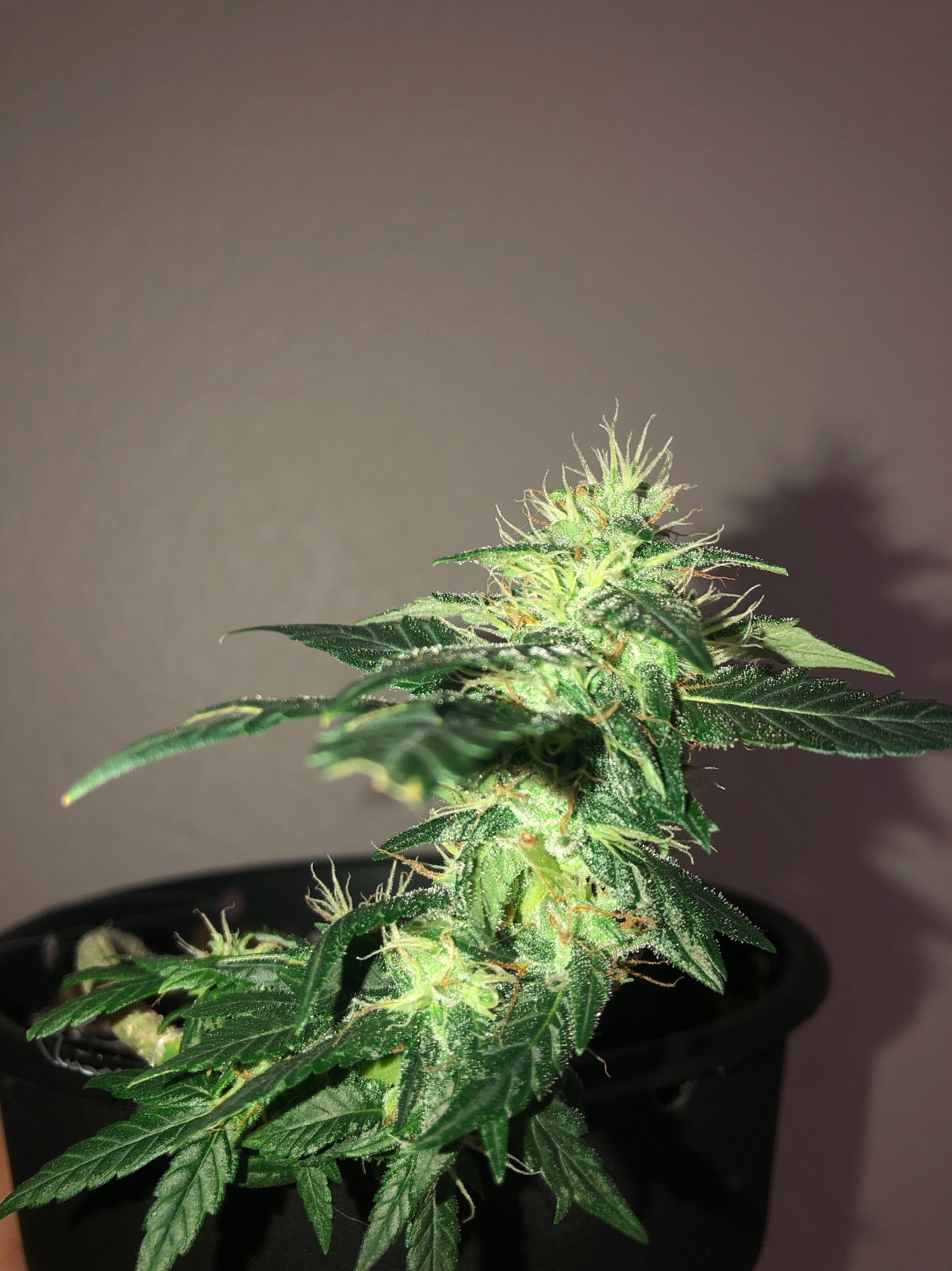 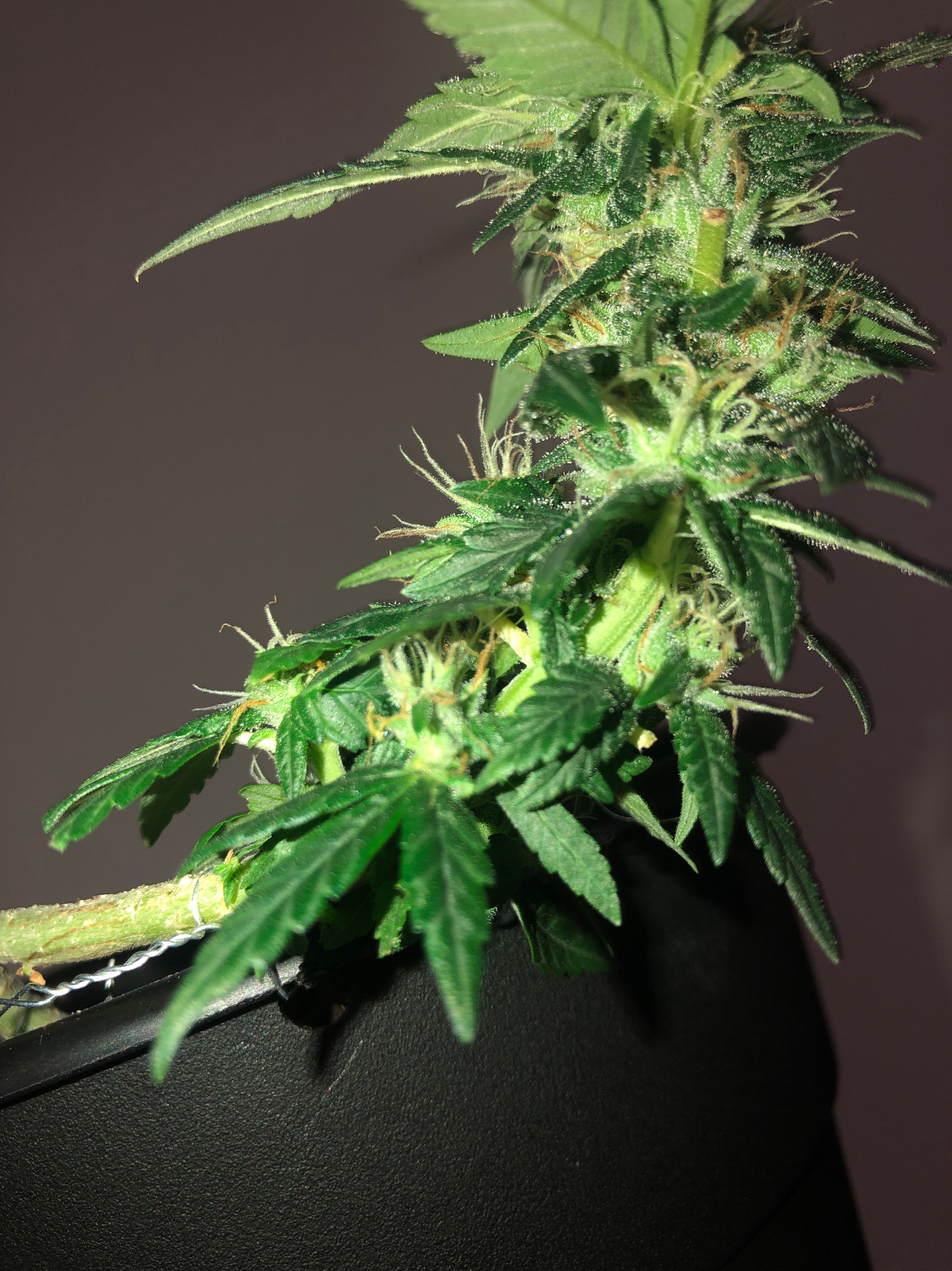 Plant seems to be frosting pretty well. Buds have been getting bigger also. Going to begin flushing soon 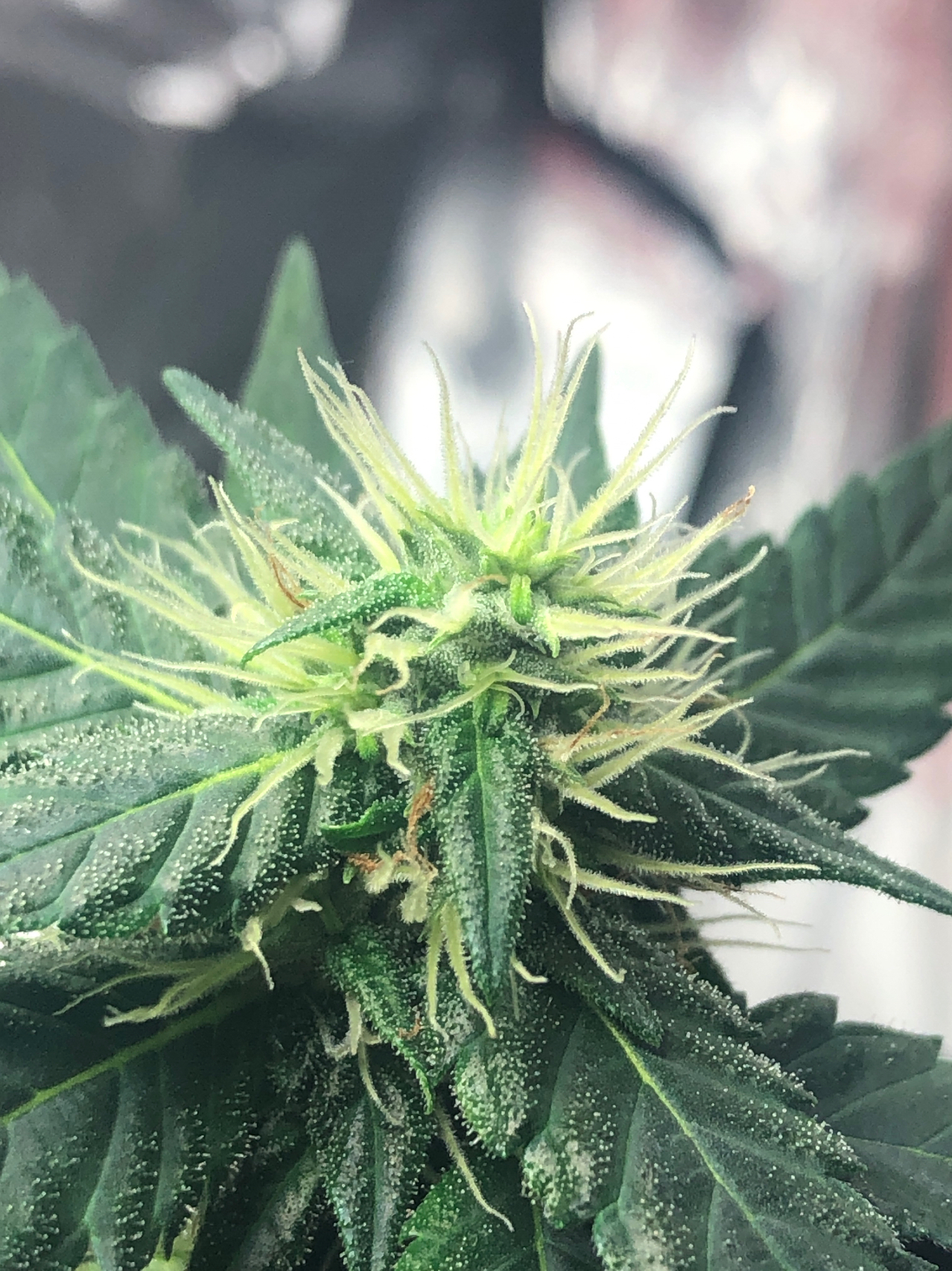 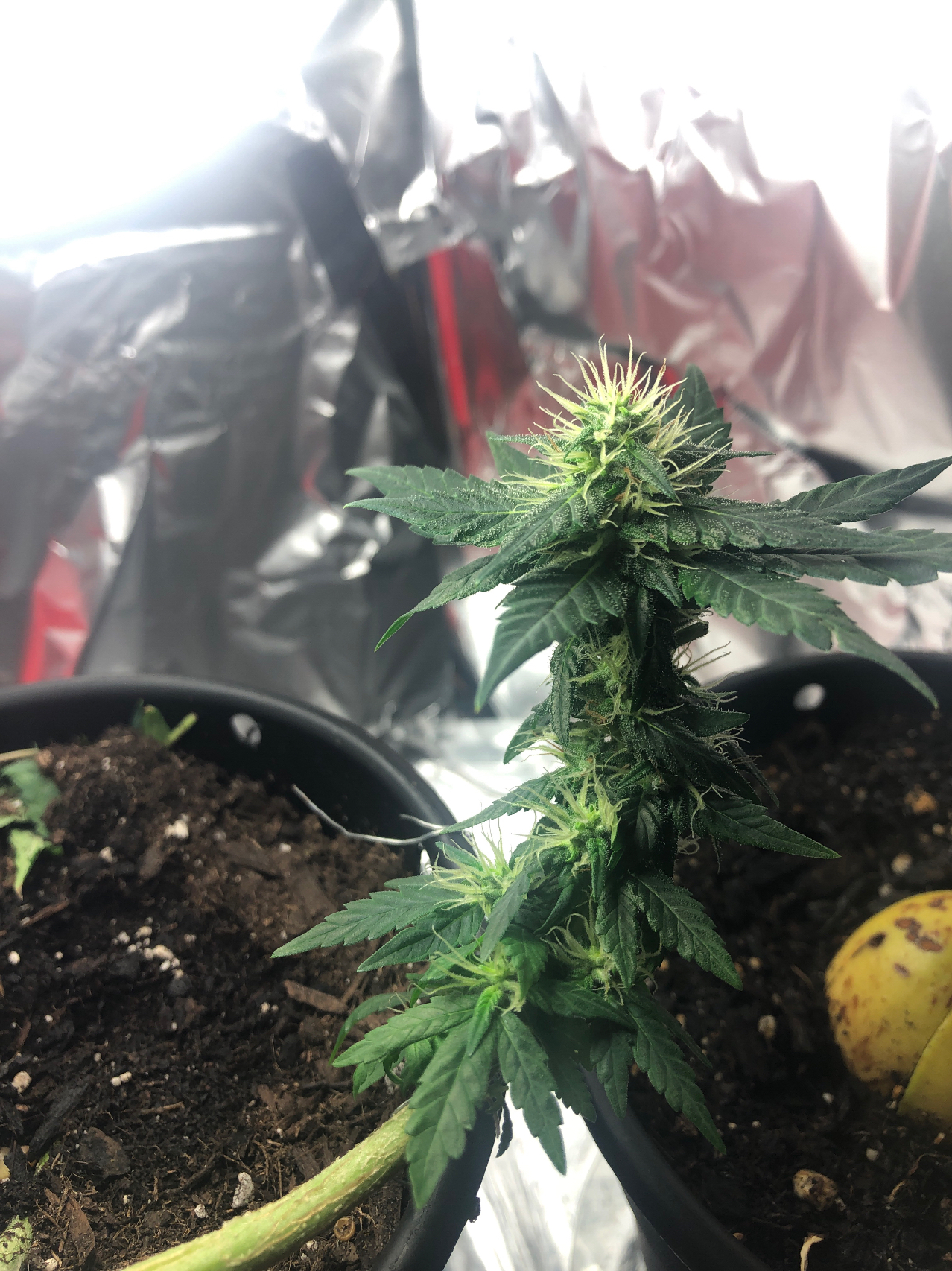 Did some defoliation on the plant , not sure if I over did it or not but seems to be looking okay. Frost is building up 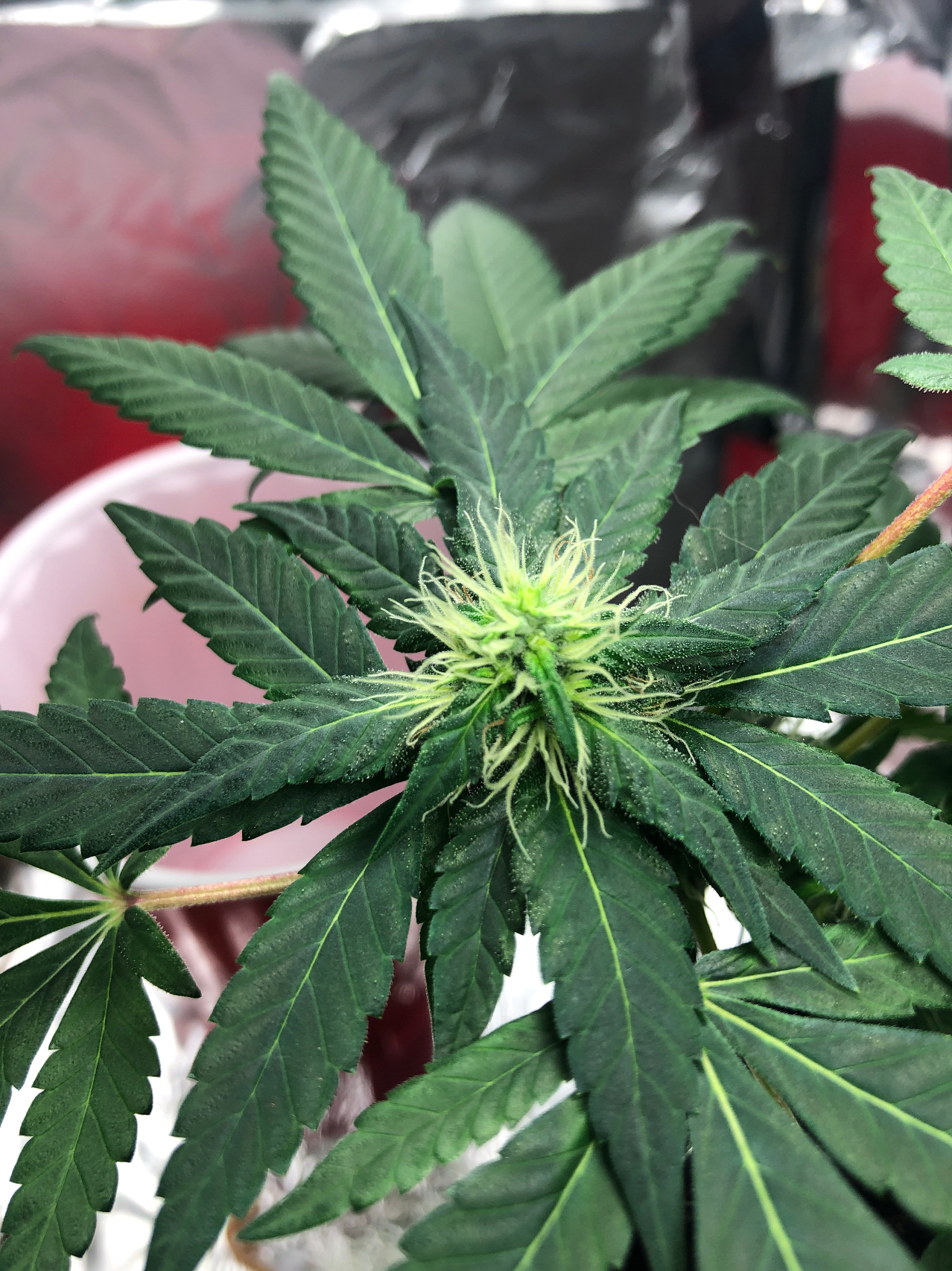 Seems to be doing healthy!

tristanstree What light are you using? 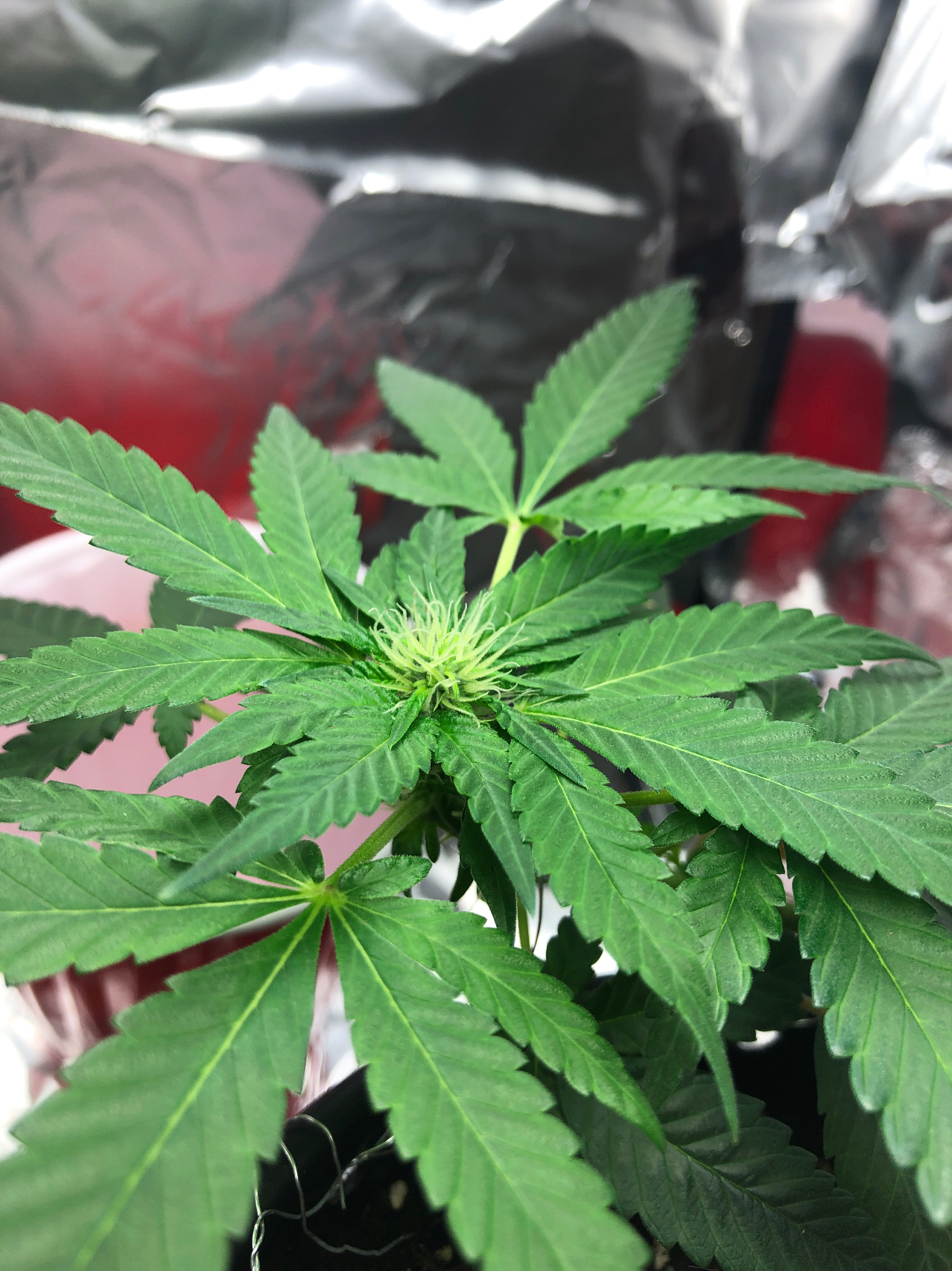 She seems to be doing well and growing healthy. Pretty glad this strain made it through. Will keep posting more pictures. 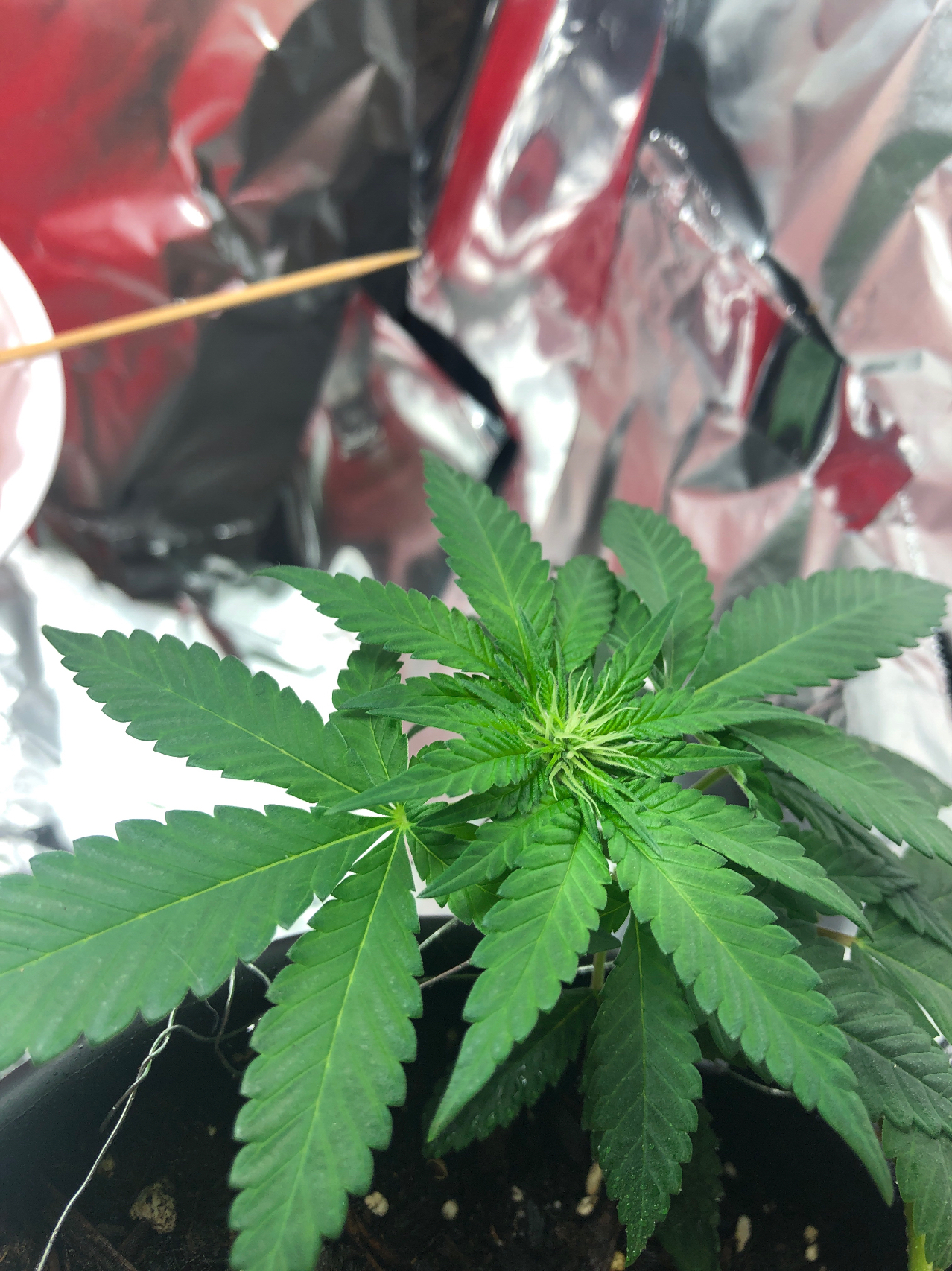 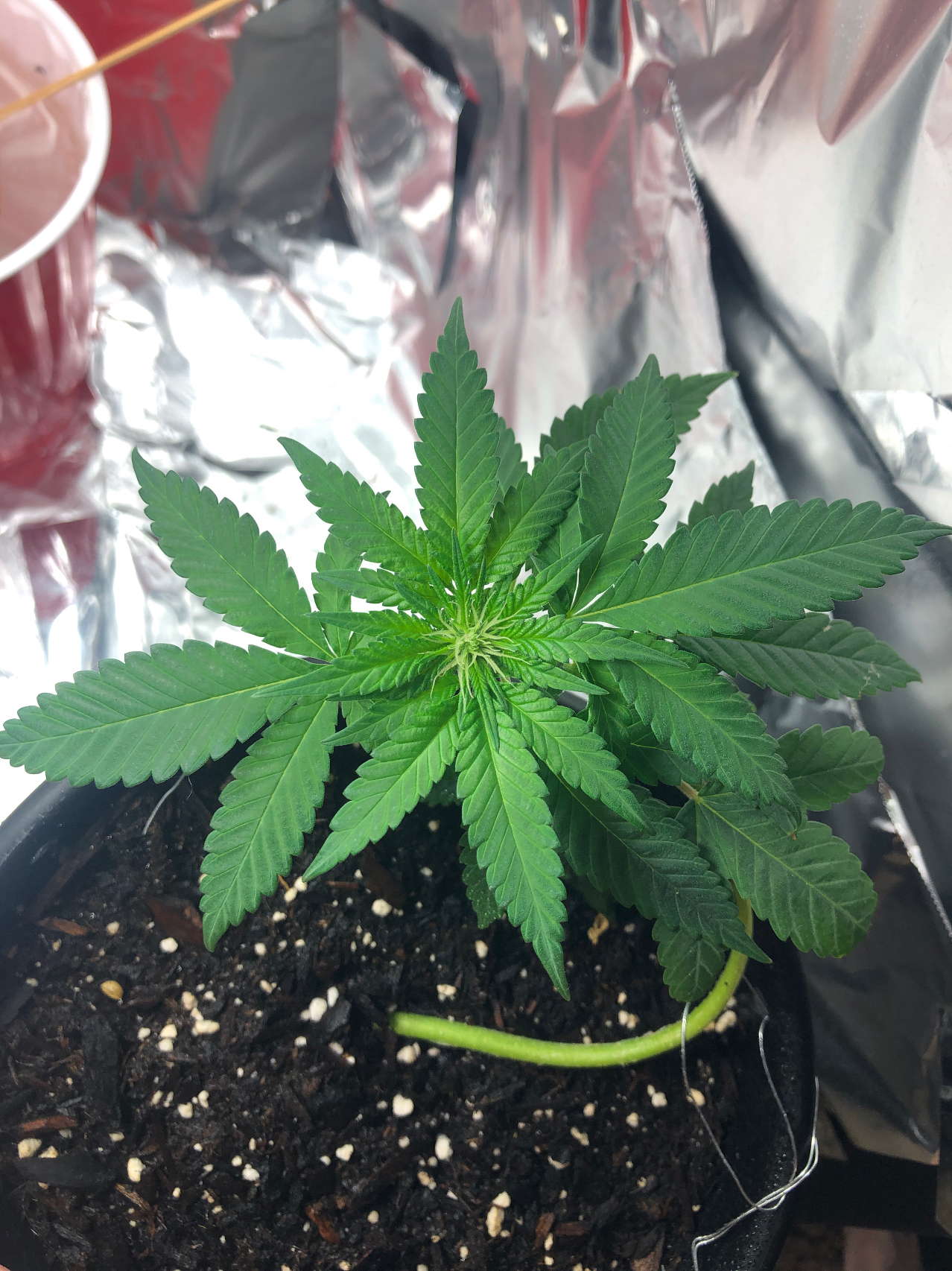 One of the plants died off. Now I’m left with one. The one that died started flowering before this one so I’m assuming this one is a sativa or sativa dominant hybrid. Seems to be really healthy and pistils are coming in nicely. 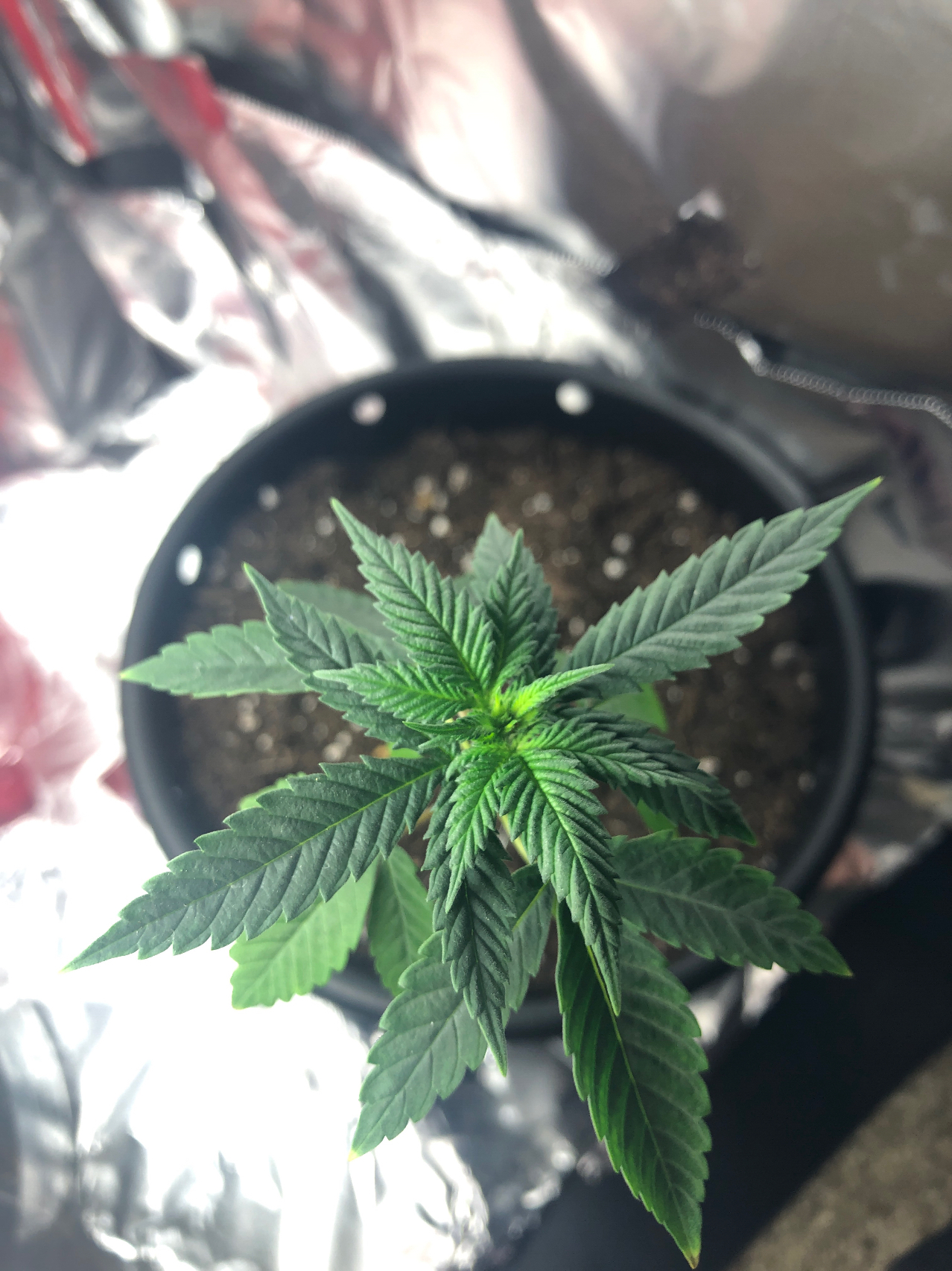 I believe this is bud growing , hope it’s not pollen sacs 😂 2 plants growing so far , early flowering to see what strains and to see if they’re female. 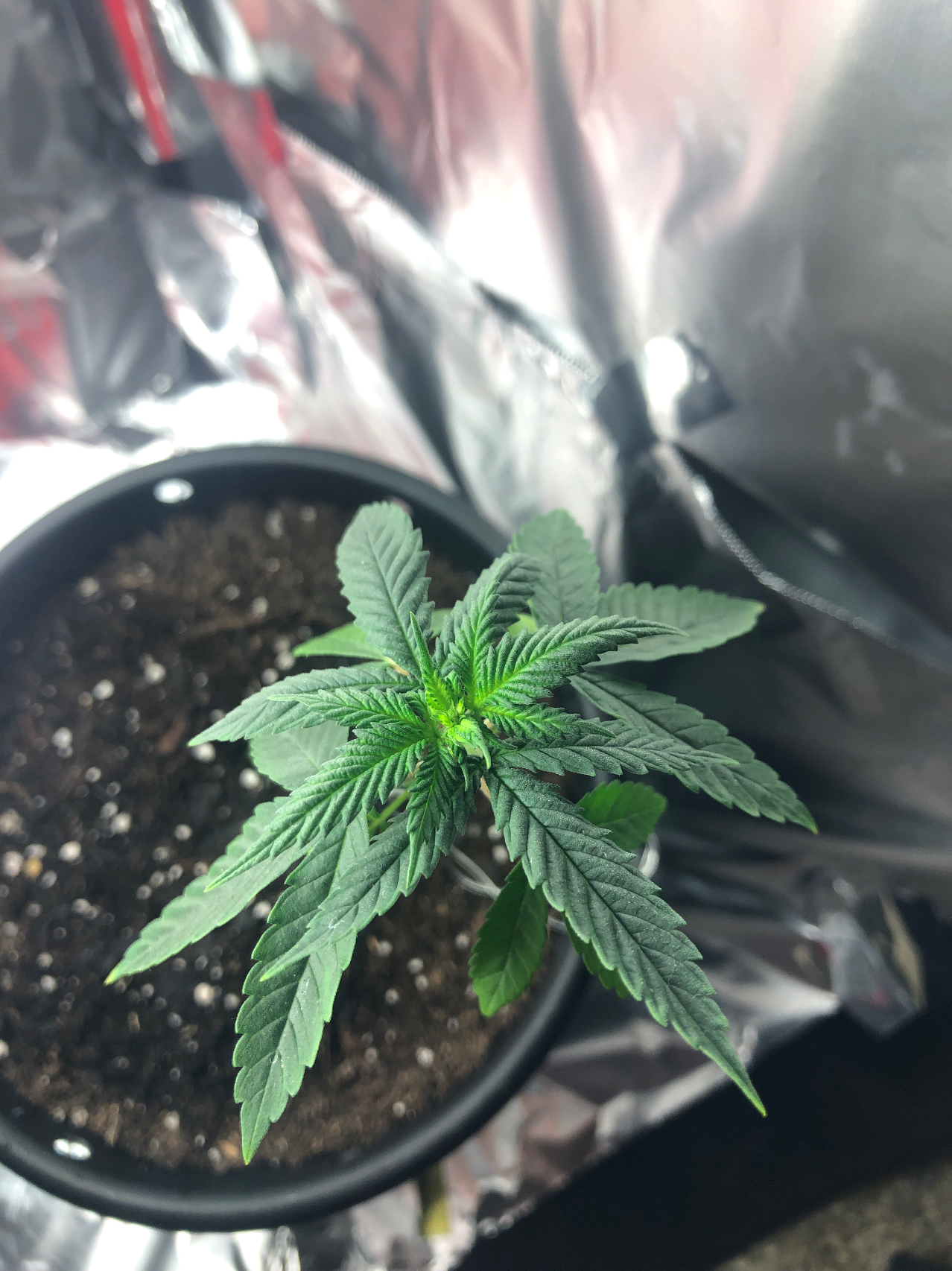 Both seem to be doing well , waiting for buds to build up. Set up is a storage bin , 2 cfl bulbs , foil and not sure what size pots believe they’re 1 liter and have miracle gro in them. 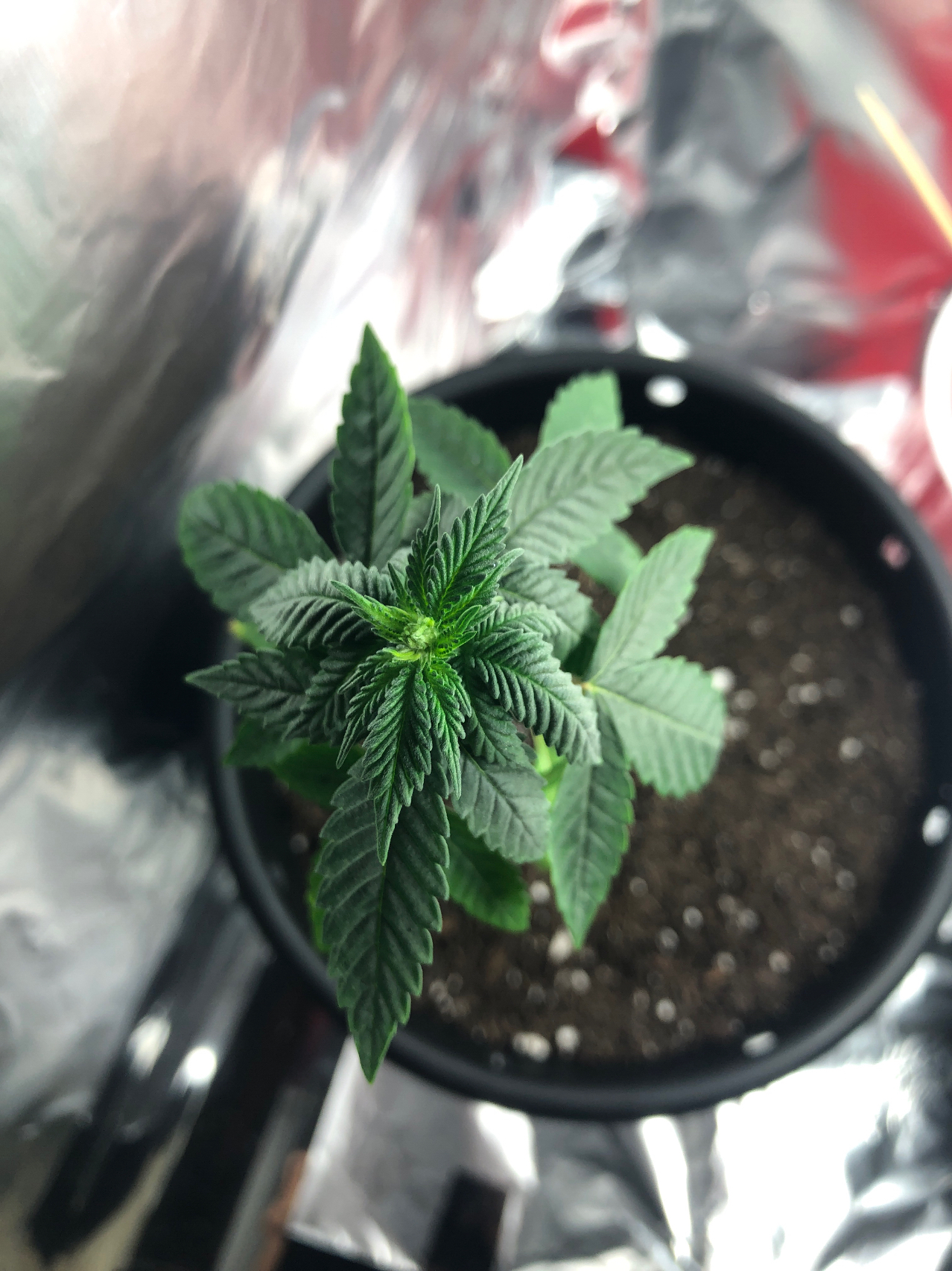 Trittni Oh man, I threw at least 5 seeds into each of mine?!

One plant is normal and the other in trying lst. Seem to be doing okay so far. Also transplanted into something a bit bigger. 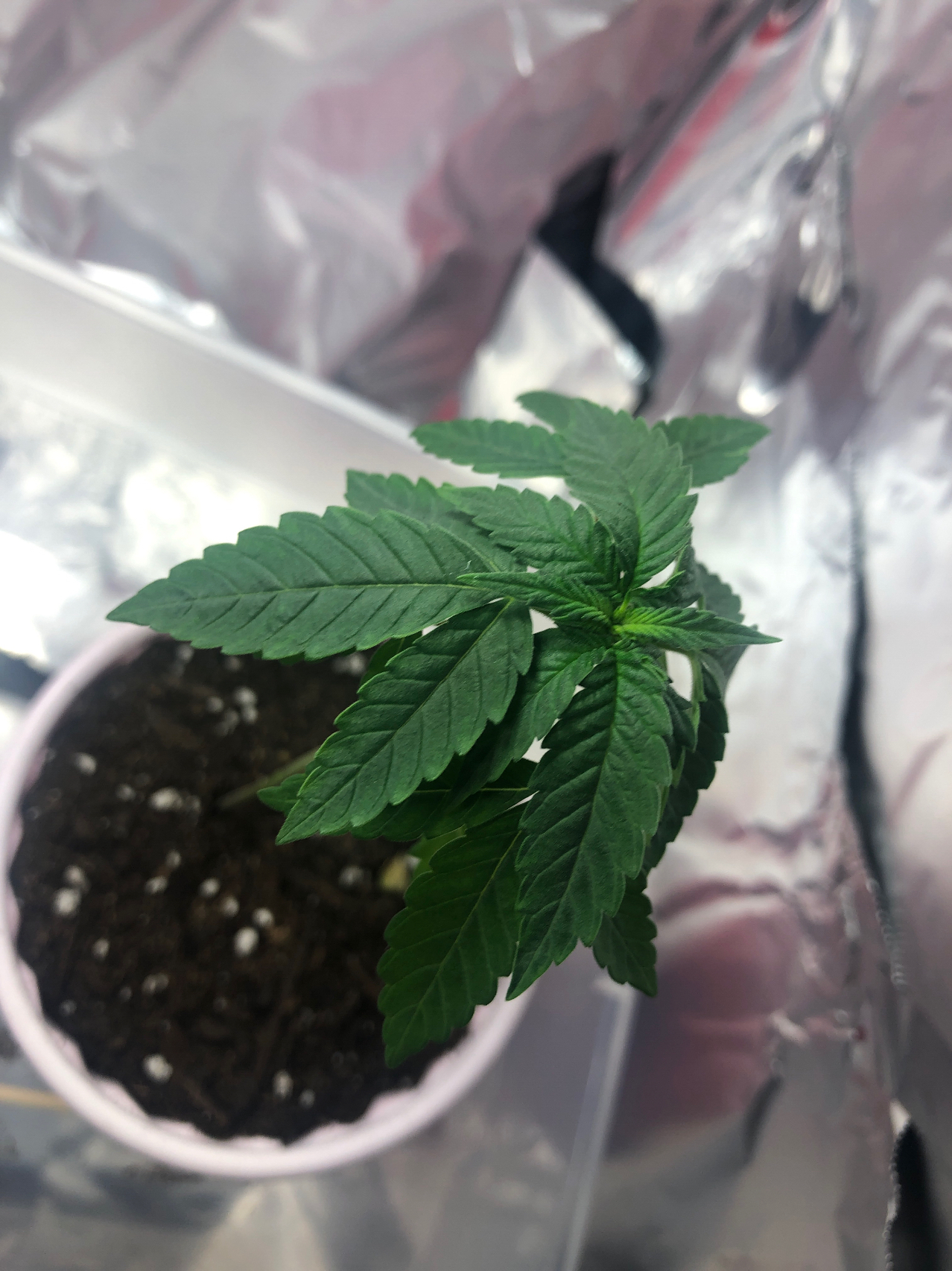 3rd day of flowering. Decided to toss them into 12/12 just to sex them early and see if any bud will grow. I’m just trying to grow something light before I invest in buying seeds and better equipment. Just trying to have fun with this grow

Jdelvec Yes I realized I just wanted to see if I could make them flower with my conditions and to find out if they were even female. They were bag seeds but I transplanted them into something a little bigger so hope it helps them !

Loslobos33 So did you change them back to a veg cycle when you transplanted them? 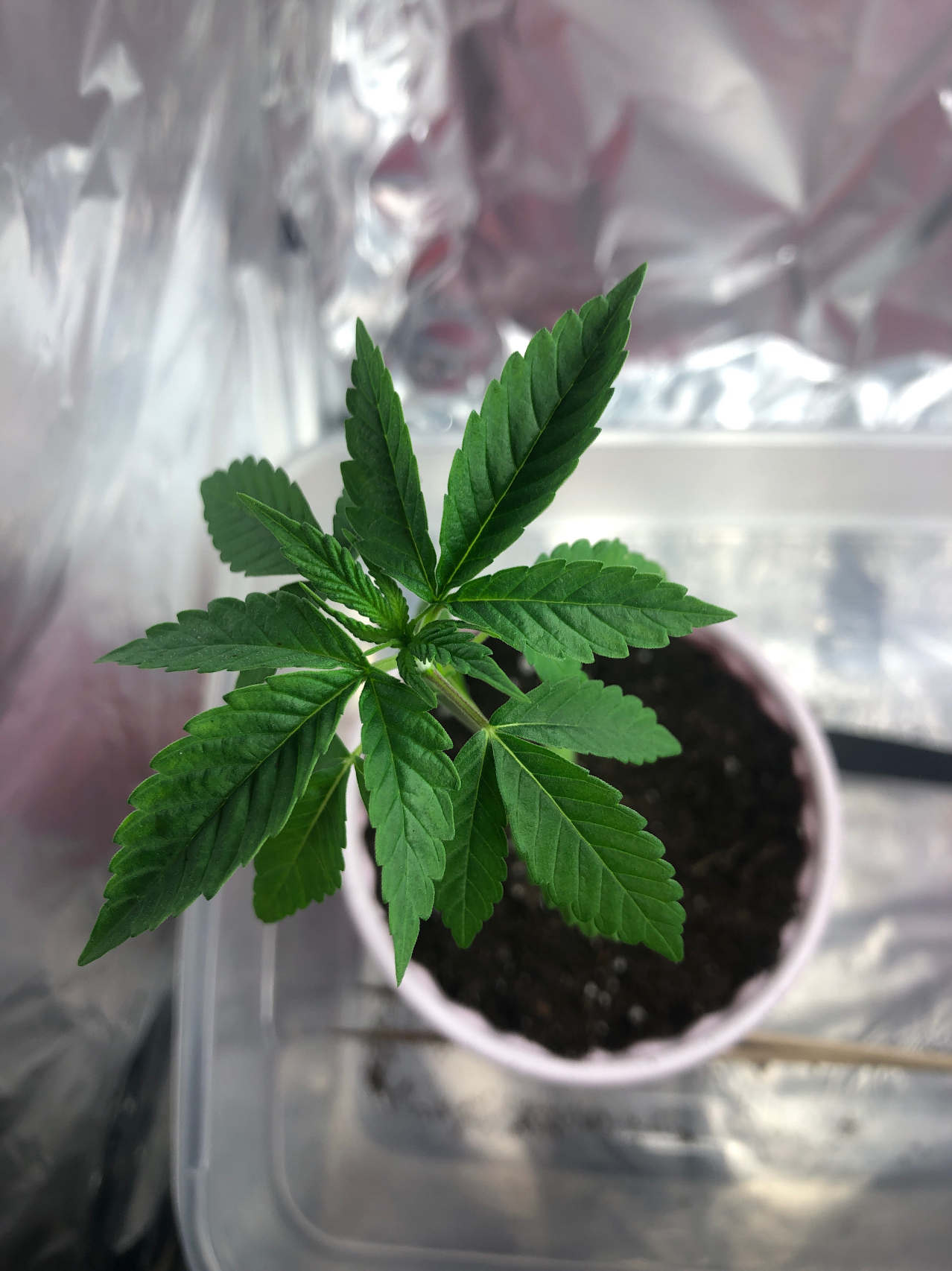 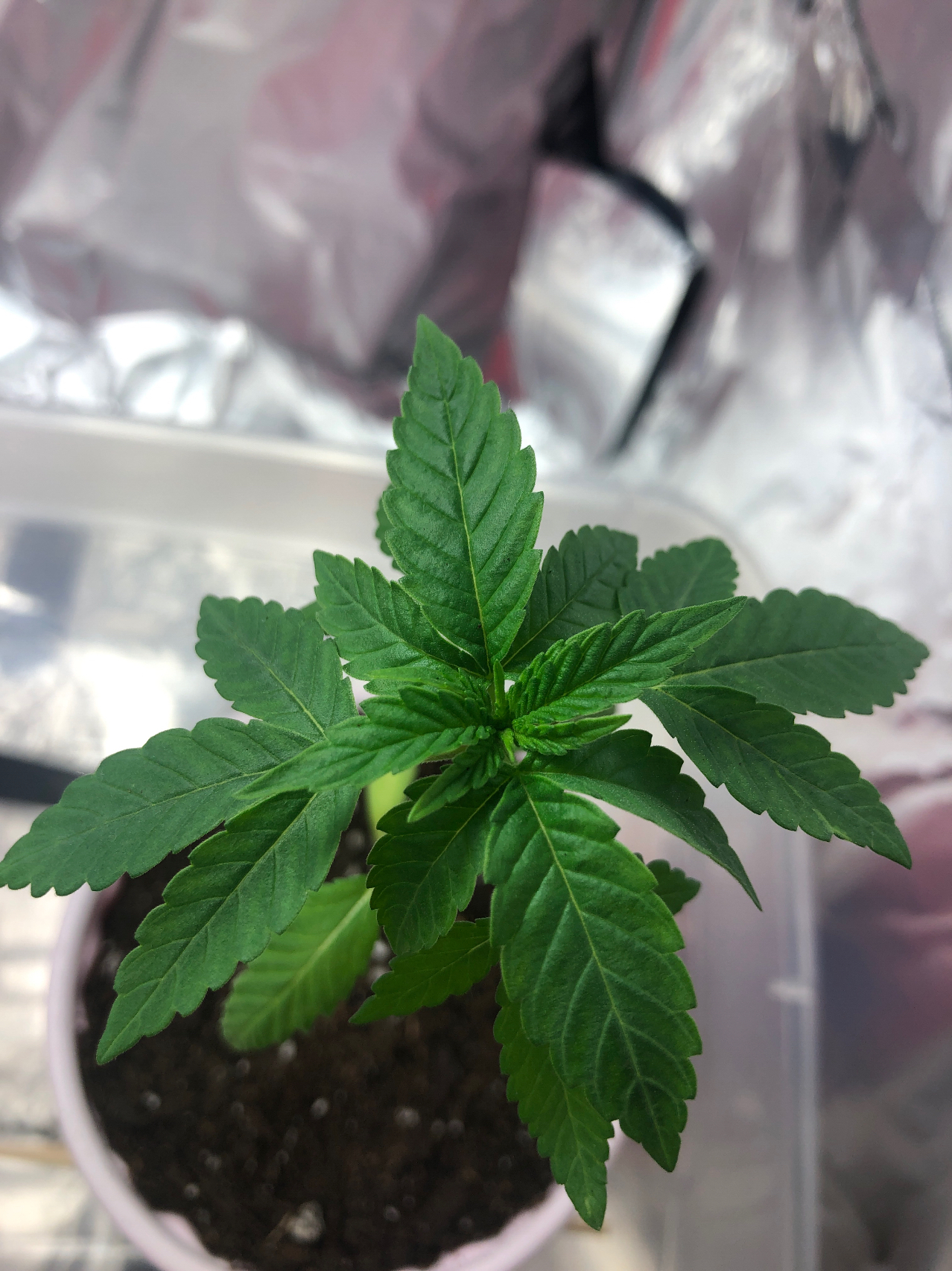 Added more soil to cups , on 5th set of leaves currently. Not sure if I’m going to lst them or top them. 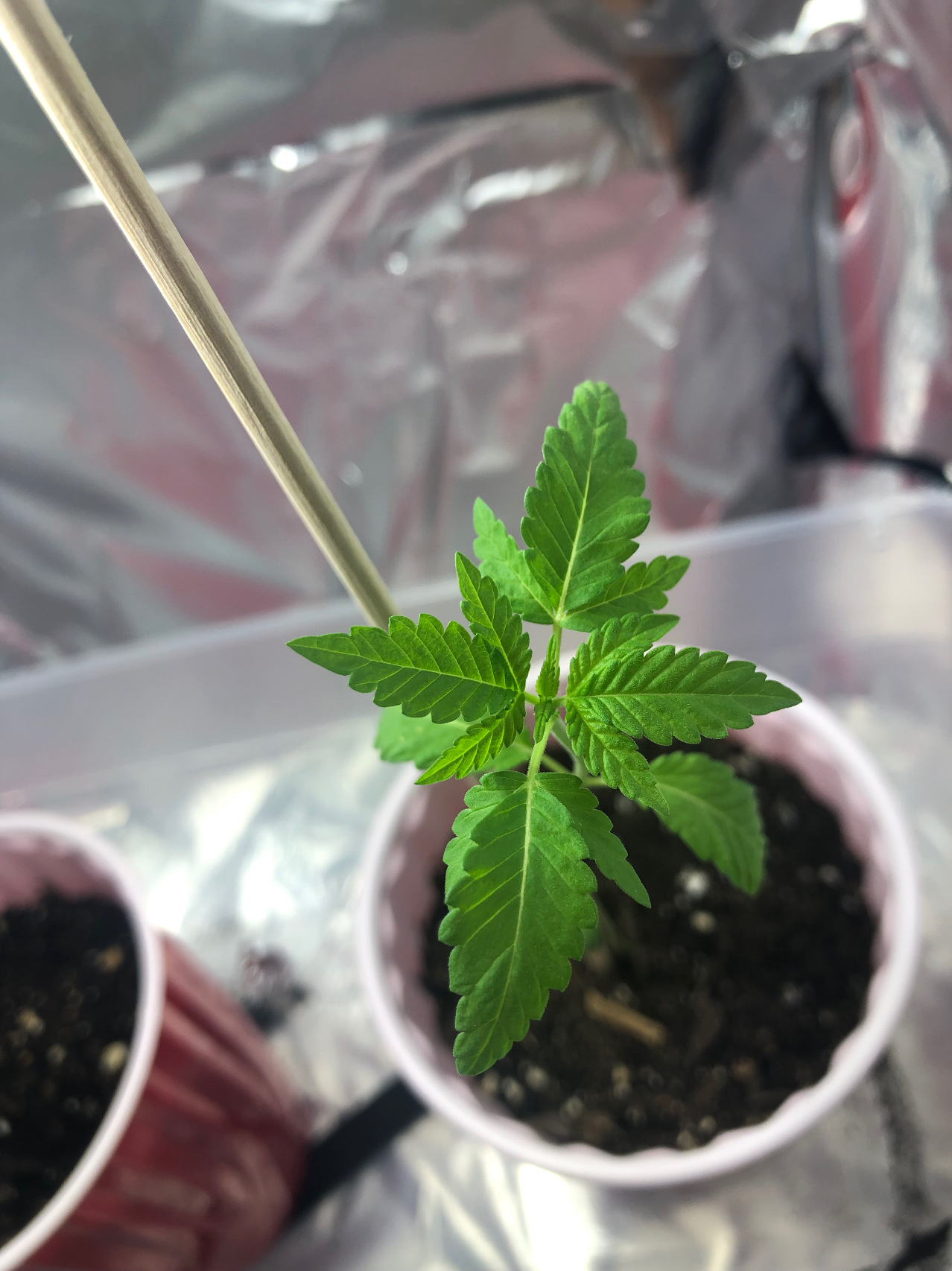 Plants seem to be doing alright so far , finally got a timer to put them on an 18/6 ratio.

Decided to make a small tub setup. This isn’t by any means professional, just a fun diy thing. Spent about $25 on everything. First time growing so just trying to get the grasp of things. Seedling on right is crooked due to the way it was positioned by window. I know you aren’t supposed to use foil but figured it wouldn’t be too bad since lights aren’t too powerful. Tips welcome ! 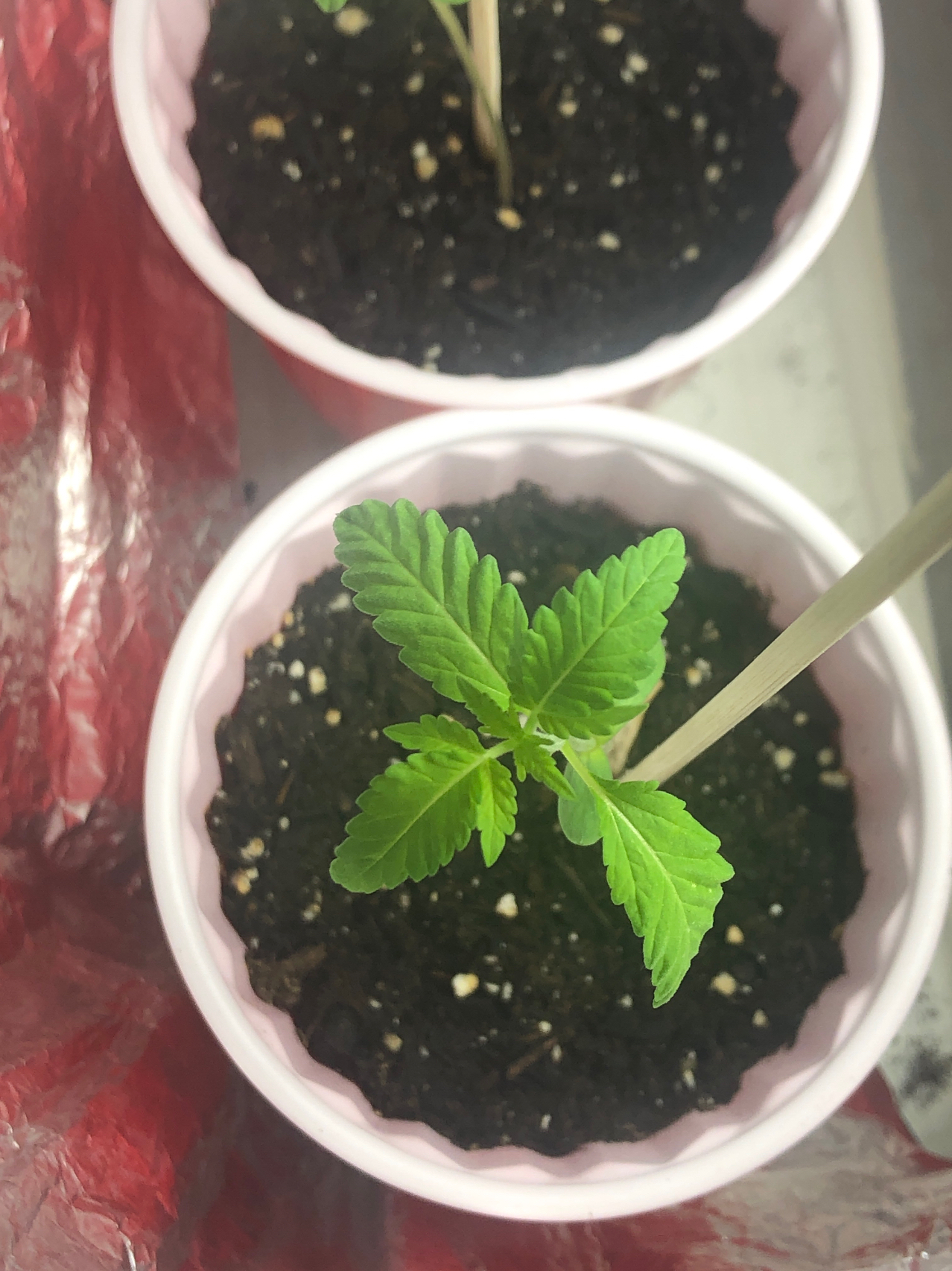 Plants have stretching , gonna transplant in a couple weeks to something a tiny bit bigger but gonna have them in my room so nothing too large

Still growing well I believe. Seedling in middle looks like possible indica? Not sure 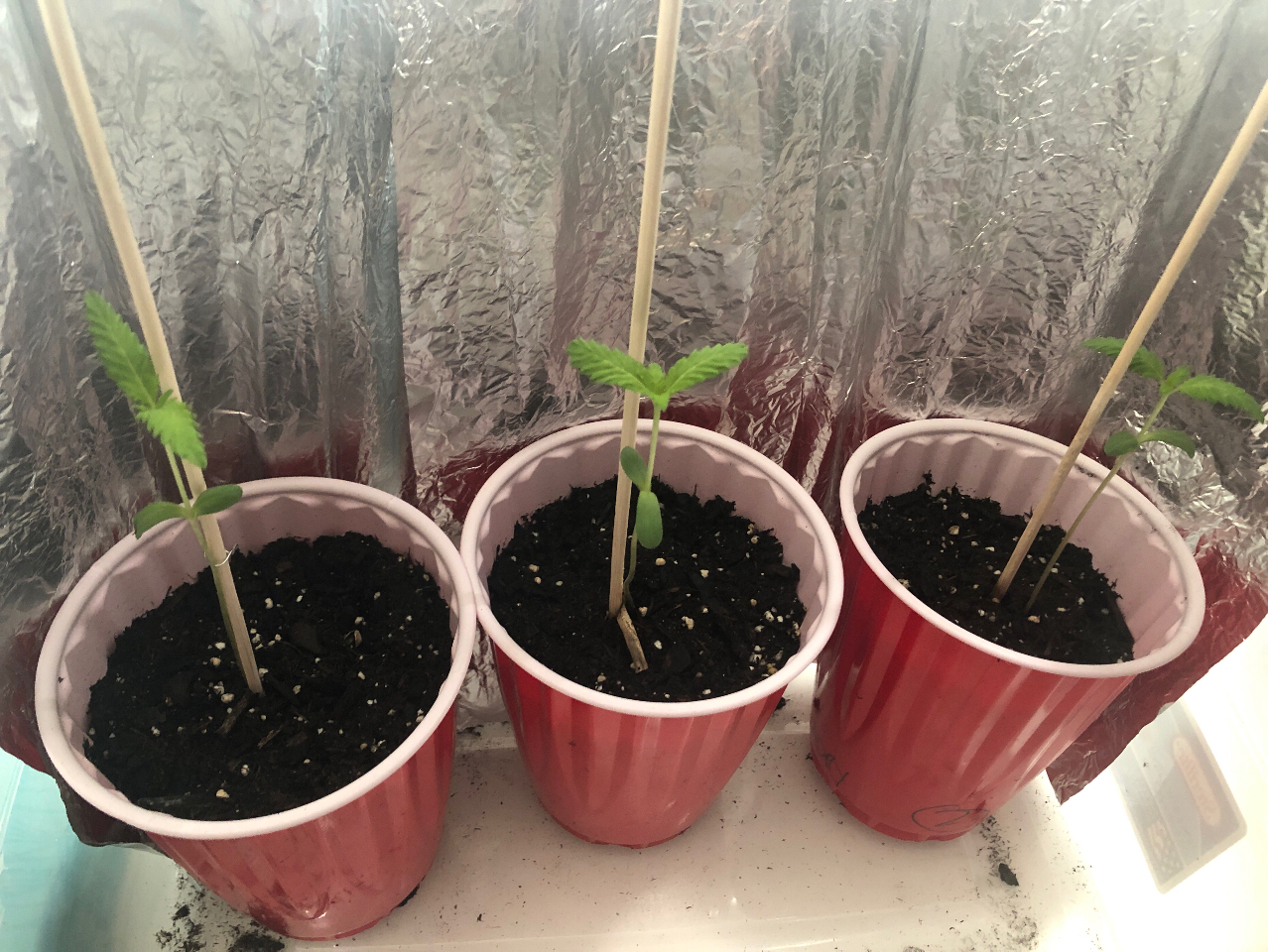 Plant on left had to be adjusted with floral wire to hold it up straight , other two seem to be doing fine. Been receiving sunlight and seen okay. Tips welcome!

Ace4261991 Only tip I can give is put in pots soon unless you want to go the solo cup route and want to make small plants then just put a few drain holes on the bottom if you haven’t already and not to overwater instead of being on a water cycle with dedicated watering days wait until the soil looks dry and the cup is much lighter then water.

Tres4_growsloud If you wanna avoid them being to stretchy you need more 💡 .. put that cfl as close as you can without burning

Seems pretty healthy so far. Added a skewer next to them to get them to be straight but not sure if I should remove them or leave them still? Would love to hear some tips. Thanks! 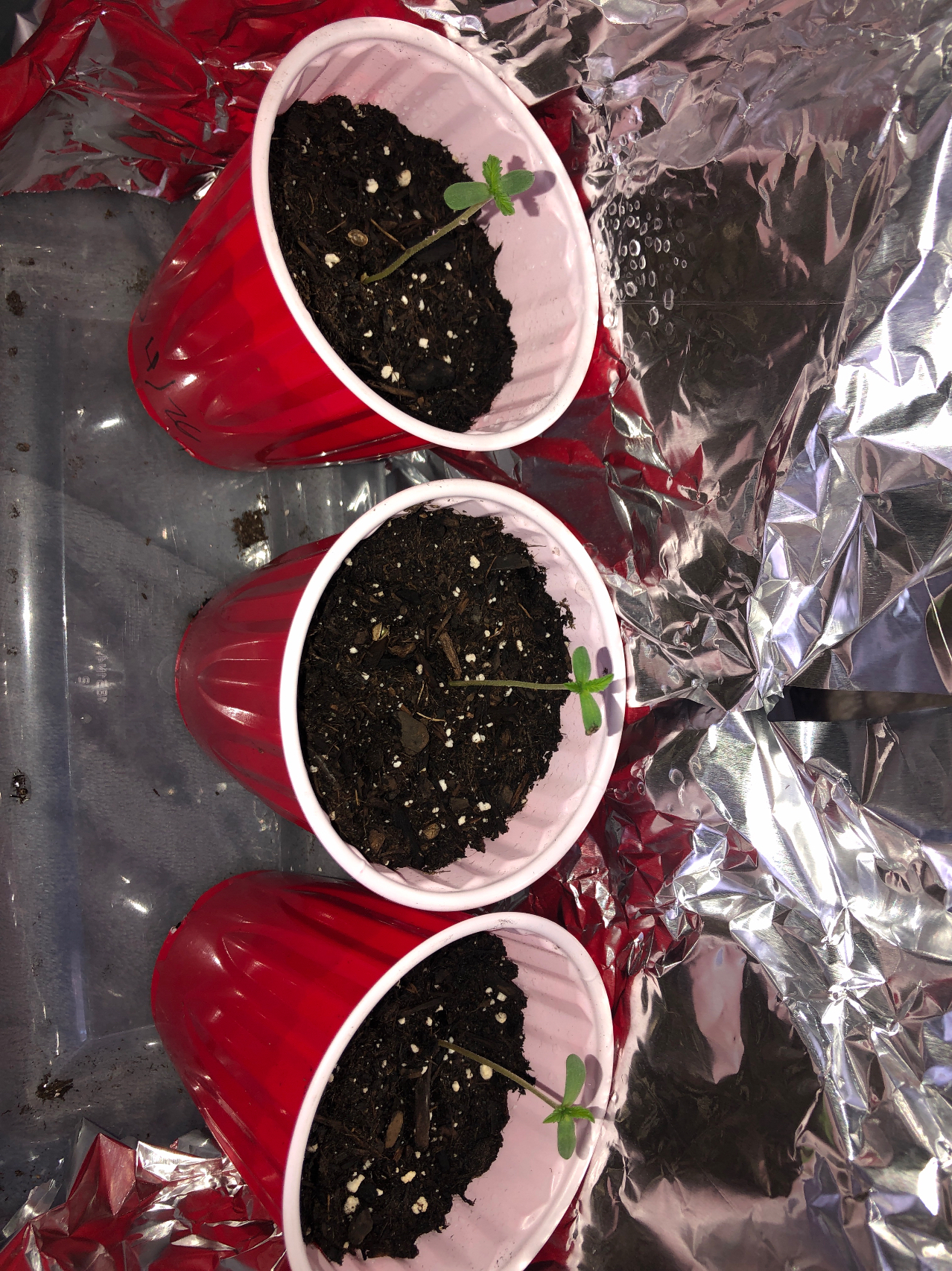 Day 4 , Been using a cfl and slunlight through window for lighting. I believe they’re healthy but would like some insight if possible! Thanks 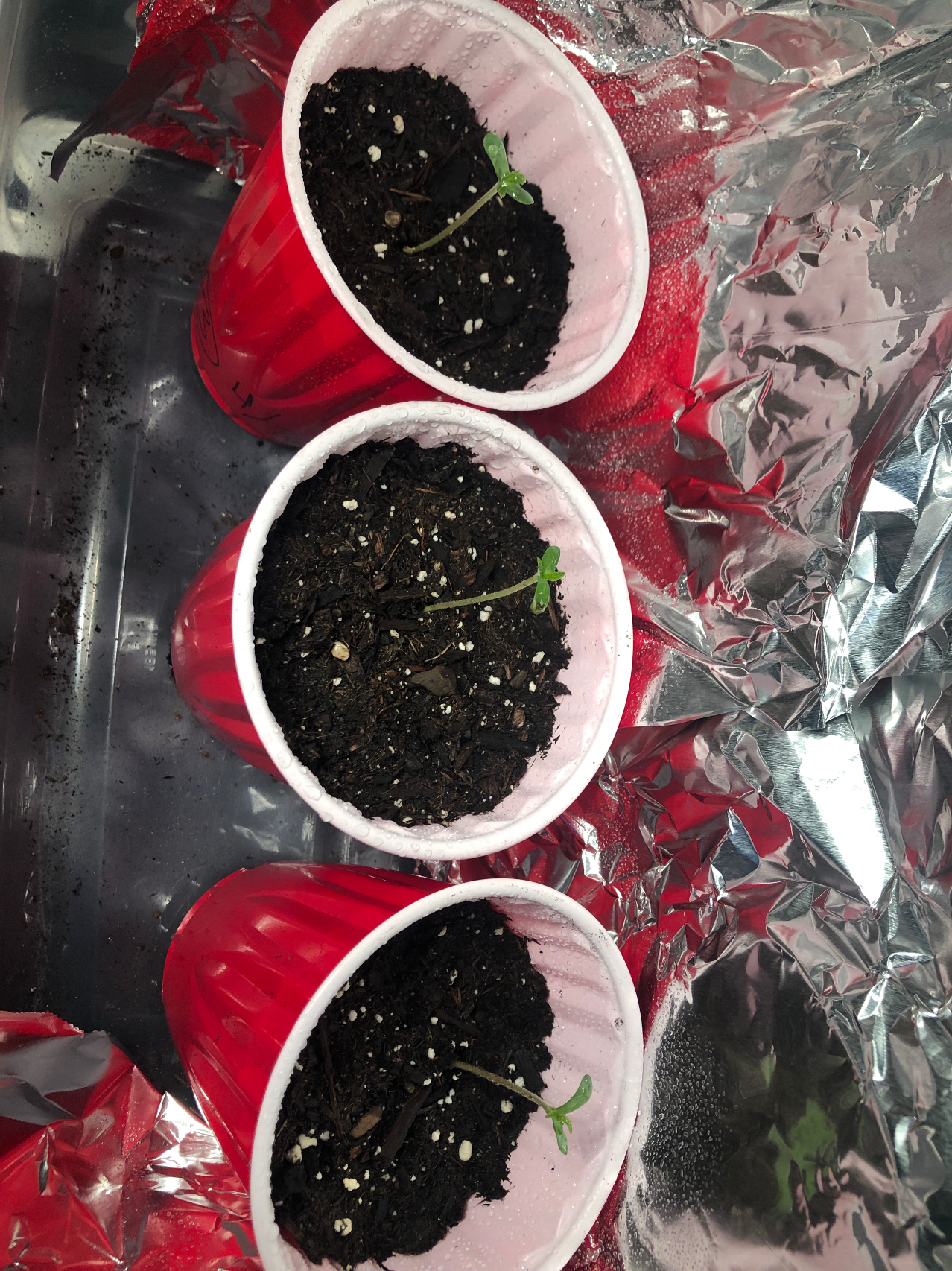 Seeing some growth coming in. Looking healthy so far. First time growing ever 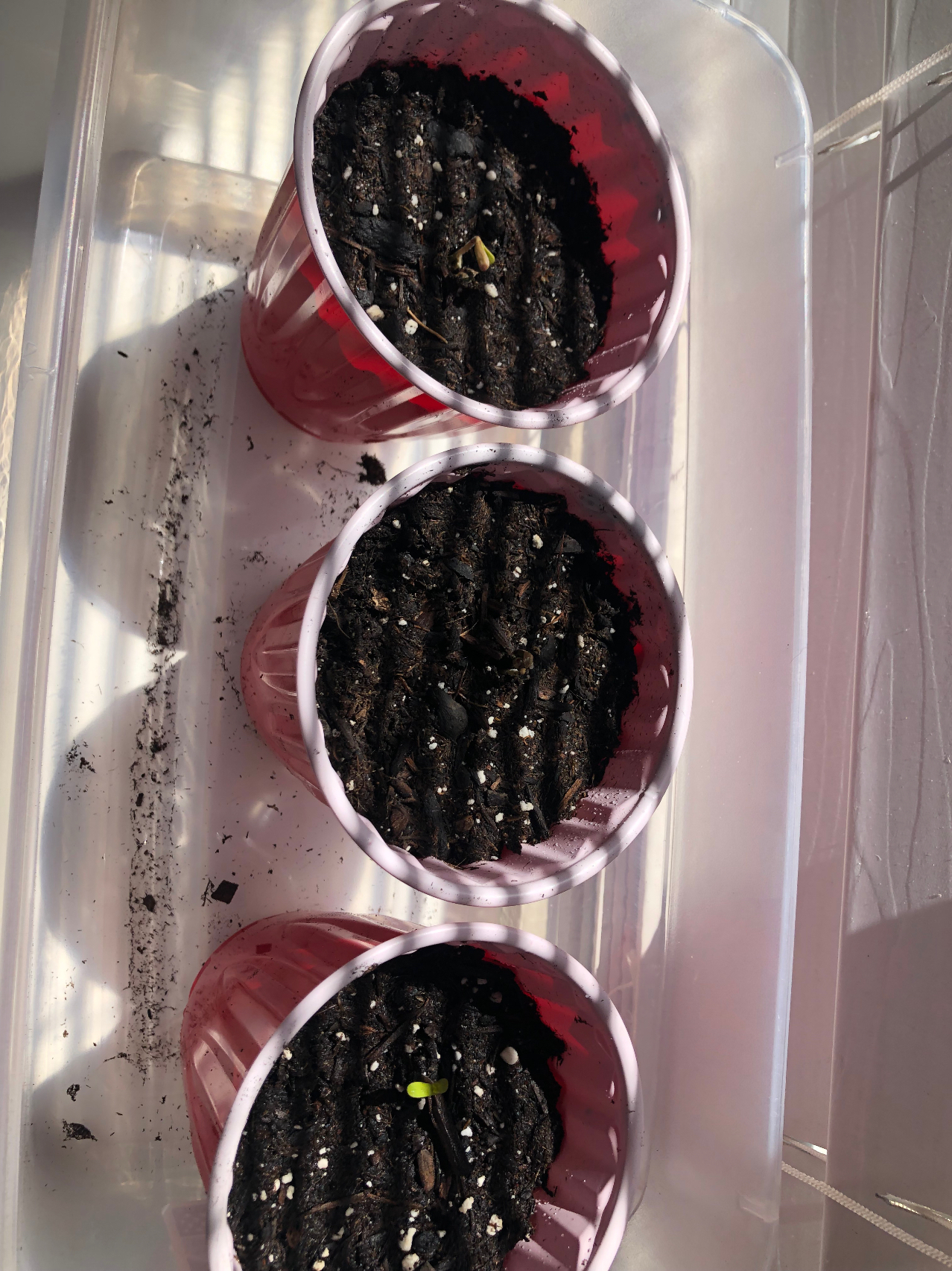 Seeds have broken through soil and enjoying light. Cup in middle of 3 had seed stuck on top, removed seed and waiting for leaf to come up. First time growing and just having fun with it.